The development of entertainment journalism in the Black press was an important factor in bolstering the circulations of Black  newspapers during the first half of the twentieth century. Entertainment culture continues to be a driving force for many Black news institutions that are drawing upon a journalistic tradition that developed apart from, but contemporaneous with, trends in the mainstream press.

The Black press very much aligned with the mainstream sensational press in establishing coverage of entertainment culture as particularly newsworthy, even if the contextual elements of celebrity reporting differed substantively from that of mainstream journalists covering white celebrities. By 1922, the New York Amsterdam News had established an entertainment section. Three years later, both the Chicago Defender and Pittsburgh Courier followed suit. In 1929 and 1930, respectively, the Philadelphia Tribune and Baltimore Afro-American also began to dedicate a section of their newspaper to entertainment coverage so that by the early 1930s, entertainment sections were commonplace in Black press newspapers. Even the Philadelphia Tribune, a conservative newspaper that rarely devoted front-page column space to anything other than stories devoted to politics and education, began to cover entertainment more aggressively to compete with other Black newspapers in the northeast. It even began to run a column called the “Tribune Theatrical Night Life Page” which featured society news and “theatrical chit chat.” Often, in the Tribune and other Black-centered newspapers, this “chit chat” included celebrity gossip.

Celebrities came alive in the pages of these newspapers, whose writers did not shy away from sharing personal – and sometimes salacious – bits of gossip about their favorite entertainers. Journalists let readers know about Louis Armstrong’s failed diet plans and Roland Hayes’s affair with an Italian countess. They chided Josephine Baker’s fiancé as a “gigolo.” And they speculated about the likely unpleasant long-distance phone call Jesse Owens received from his childhood sweetheart – a phone call that encouraged him quickly thereafter to put a ring on it. Yet, it would be inadvisable to merely write off this coverage as a means to shift newspapers. Celebrity journalism, as in all other forms of news, contains important social and cultural cues, and for the writers of the Black press, the idea of “celebrity” was often imbued with issues of representation in public discourse. 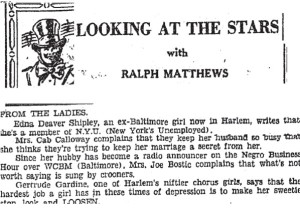 The concept of “celebrity” is a journalistic invention developed in the early twentieth century by mainstream “yellow” newspapers hoping to bolster their circulation figures. Scholarship on American celebrity culture has suggested that celebrities, as early as 1900 when moving picture and recording technologies began to bolster an entertainment-based leisure market, operated as symbols of shared cultural values and beliefs. Journalists catapulted entertainers to god-like status, heralding their achievements as paragons of American self-determination. This concept emerged during a time when the racist ideologies of Jim Crowism became so deeply embedded in American values that Emancipation became an egregious misnomer of the condition of Black Americans. Accordingly, mainstream newspapers failed to cover Black entertainers, whose “inherent inferiority” forbade them from achieving such high cultural status. Black journalists paid attention to Black celebrities otherwise maligned or ignored in the mainstream press. Some of the most newsworthy celebrities to appear in the early twentieth century Black press have received little academic attention. To date, biographical information on entertainers such as Fredi Washington, James Reese Europe, Charles Gilpin, Harry Wills, Florence Mills, and Roland Hayes is sparse. Their important contributions have been overlooked – first in the mainstream press itself and later in scholarship relying on only those publications as their primary source material.

Yet, those entertainers came alive in the pages of newspapers and magazines written by and for the Black community. Journalists writing for the Black press during this period helped to establish the creative and aesthetic terms of Black American cultural expression. Their concept of celebrity differed from that of mainstream journalists covering white stars – Black celebrities, according to the journalists who covered them, often carried with them the obligation of representing the Black race (in all of its disparate social, geographical, and economic forms) as a collective entity battling for basic civil rights. 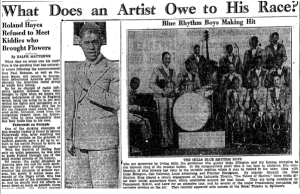 The insights provided by inquiry into Black press content challenge official histories that have notoriously overlooked and undervalued the contributions of Black Americans. The more that Black press scholars engage with this material, the better equipped they will be to train beginning journalists facing the task of making sense of celebrity culture in the context of enduring struggles against American racist ideologies.