Colored Conventions and the Early Black Press by Benjamin Fagan 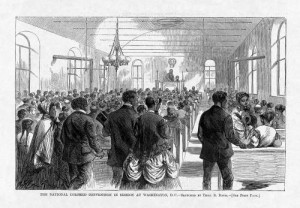 Recently, I’ve been spending quite a bit of time looking through the minutes of the Colored Convention movement. Beginning in the early 1830s, national conventions were held on a regular basis across the northern United States and drew delegates from across the country. State conventions were also a regular occurrence, and after 1865 newly-free black men and women began organizing meetings in places like Virginia and South Carolina. The minutes of many of these conventions have recently been digitized at the Colored Conventions Project, an indispensible resource for those interested in nineteenth-century black activism.

Colored Convention minutes, at the national and state level, reveal the pride of place that black newspapers occupied for nineteenth-century black activists. For example, the delegates to the 1847 National Convention of Colored People, held in Troy, New York, spent nearly one quarter of the convention debating the report from the Committee on a National Press. The Committee called for the creation of a specifically “national” newspaper, which led to a fierce and illuminating debate over just what such a paper might look like, and who would be in control of its operations. Similar discussions fill the pages of Colored Convention minutes. Delegates to the 1841 state convention in Pennsylvania resolved “that in the opinion of this Convention, a newspaper conducted by the colored people, and adapted to their wants, is much needed in this state,” and the attendees of Ohio’s 1849 state convention recommended that “this Convention take measures to establish a Newspaper, in some of the towns in this State, which paper shall be the organ of the people.”

The minutes of Colored Conventions help us better understand the ways in which black activists envisioned and defined the purpose and production of black newspapers. The 1847 Committee on a National Press imagined “a full and complete establishment, wholly controlled by colored men; let the thinking writing-man, the compositors, pressman, printers’ help, all, all be men of color[.]” Seven years later, a report from the National Emigration Convention of Colored People made a similar point in calling for a periodical within which “all the articles shall be productions of colored men[.]” Such reports locate the blackness of the black press in the men and women (despite the language of the minutes) who led, made, and contributed to the publications. Few of the black newspapers and magazines before the Civil War actually met this standard (some had white printers, and all included a substantial amount of content from white writers), which underscores the difficulties of putting the principles outlined in the Convention reports into practice. In imagining a quarterly magazine, for example, the National Emigration Convention proposed that the “ablest colored writers in both hemispheres should be engaged as its regular contributors[.]” The publication was never realized, and the early black press rarely offered readers contributions from black writers from South America, but the Convention report highlights how some black activists saw the black press as a way to showcase and bring together black communities from across the Americas.

Finally, 19th-century Colored Convention minutes reveal the deep interconnectedness of black activist institutions. Many of the delegates to such conventions worked on actually existing black newspapers. Samuel Cornish, who in 1827 co-founded Freedom’s Journal, the first black newspaper in the United States, was a regular attendee at conventions in the 1830s, as was Philip Bell, who founded the Colored American. The 1847 convention was attended by black newspaper editors such as Frederick Douglass (North Star), Thomas Van Renssellaer (Ram’s Horn), and Charles B. Ray (Colored American). Martin Delany, who edited the Mystery and co-edited the North Star with Douglass, was perhaps the most prominent delegate to the 1854 National Emigration Convention. Mary Ann Shadd, editor of the Provincial Freeman, overcame fierce resistance to serve as a corresponding delegate to the 1855 National Colored Convention. These editors, and others, consistently printed the calls for Colored Conventions in their newspapers, and offered readers who could not attend detailed reports of the gatherings. Black newspapers and Colored Conventions, then, worked to create and support one another. And this relationship reminds us of the impossibility separating the history of the early black press from the larger story of black institutions in the 19th-century.

A BPRC member, Benjamin Fagan is also an assistant professor of African and African American Studies and English at the University of Arkansas.  He is completing a book manuscript that examines how the institutional and material forms of black newspapers helped shape ideas of black chosenness in the decades before the Civil War.