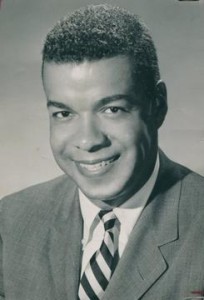 By now anyone following Black journalism or journalists knows that Charles “Chuck”  Sumner Stone, Jr. passed away at the age of 89 on April 6, 2014. Most known as the first Black columnist and for his long tenure ((between 1972 and 1991) at the Philadelphia Daily News, Stone was also the first president and co-founder of the National Association of Black Journalists.  The story that most publications and web sites memorializing Stone will recount is that 75 African American men wanted by the police in Philadelphia turned themselves over to Stone during his time at the Daily News. Fearing police brutality these men trusted that Stone would provide a buffer from a Philadelphia police force known for its notorious abuse of African Americans.   Other pieces have also recounted Stone’s negotiation of the surrender of prisoners in Graterford prision who had taken six hostages in an attempted escape in 1981.    Like most tributes, we briefly learn about Stone’s upbringing, education and career path, in Stone’s case his path to journalism. Many of the memorials published over the past week chronicle his time in politics, writing for the Daily News and teaching in the journalism departments at the University of Delaware and the University of North Carolina-Chapel Hill, among other colleges.

Part of Stone’s journey into journalism included a stint writing for the Black Press before he began writing for “mainstream” publications. A great deal of the narrative of Stone’s life, then, celebrates his and other Black journalists’ ability to integrate exclusively white newsrooms across the nation in the 1960s and 1970s.  Thus, It is this transition from Black newspapers to white ones that also makes Stone’s life remarkable. Notwithstanding Stone’s storied life and commitment to African Americans’ struggle for civil rights in the context of white news media, his life as a journalist writing for Black newspapers serves as a larger history of Black journalism and the impact of the civil rights movement on Black newspapers in the latter half of the twentieth century.

Born in 1924 in St. Louis and raised in Hartford, Connecticut, Stone came of age during the “Golden Age” of the Black Press where reading weekly Black newspapers was a common occurrence. Founded in 1827, the Black Press was developed out of the need for African Americans to “plead our own cause.” For much of African people’s presence in the United States, (and arguably in our contemporary moment), they have been unable to rely on white-owned newspapers to present them in a positive light or address systemic racial inequity. Moreover, racism within journalism demanded that aspiring African American journalists work at Black news organs. The doors to white publications virtually remained closed until the 1960s. Thus it makes perfect sense that Stone’s first foray into journalism would be with Black newspapers. Stone’s began working at the New York Age, which evolved into some time spent at the Washington Afro-American. Stone would end his career with the Black Press as editor-in-chief of the Chicago Daily Defender.

By 1972, Stone’s move to the Daily News reflected the slowly changing racial demographics of mainstream journalism. Yet, even as this is a accomplishment worthy of all the accolades that Stone has received, it is worth reflecting on the ramifications of Stone’s and other accomplished African American journalists’ departure from Black journalism to predominantly white news publications.   Many contemporary writers and scholars of the Black Press characterized Black journalists’ exit as ‘brain drain’ and tied it to floundering Black news organizations after the civil rights movement.[ref]Roland Edgar Wolseley. Black Press, U.S.A. Ames: Iowa State University, 1990, 377.[/ref] The impact of World War II and the civil rights movement meant that African American newsmen and newswomen who traditionally worked for Black print news outlets were accorded a few select openings in predominantly white news organizations.

Indeed Newsweek published an article in 1963 titled, “A Victim of Negro Progress” that reported that Black newspapers were casualties of successes gained from the struggle for integration and racial equity in the United States. The publication forecasted the death of the Black Press due to the white press’s move “into areas once the sole province of the negro press.”[ref]”A Victim of Negro Progress.” Newsweek. August 26, 1963, 50-51.[/ref] The Newsweek article featured a number of African American journalists of the time, stating their desire to work at white publications, which reportedly paid more and contained “better standards of journalism.” Stone was also featured but was cast in a different light. Described as the “angry man of the Negro press” Stone, only 38 and editor and chief of the Daily Defender at the time the article was published, was featured as one of the few editors committed to remaining with the Black Press.[ref]ibid, 51.[/ref] 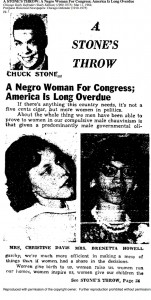 Yet few of the many memorials over the last week, though, captured an “angry” Chuck Stone. An examination, however, of the Stone’s daily column, “A Stone’s Throw” published in Chicago Defender between 1963 and 1964 gives us a hint at why Stone was described as such. Taking on anything and everyone, Stone was relentless in his efforts to tackle racism at every level of American society. In fact, Stone’s caustic critiques of Chicago’s mayor resulted in him being fired from the Defender. What’s most interesting about Stone’s writing in the Defender, is that he too recognized that the Black Press of the late twentieth century would need to change to maintain its influence.

Writing in 1964, Stone listed the following six responsibilities he saw the Black Press having in the post-Civil Rights era:

A little less than ten years later, Stone would join the Daily News, remarking that, “Many black publishers bitterly criticized the white press for this journalistic black ‘brain drain. But more accurately stated, a mediocre black press had drained itself.” Clearly, Stone believed the six-point program he saw as necessary for a vital Black Press had not been accomplished.

Despite his departure from Black journalism, Stone remained committed to the Black Press. 10 years after leaving the Defender, Stone commended Philadelphia’s Black paper of record, the Philadelphia Tribune’s coverage of the city’s Black community. He noted, “Such articles single handedly justify the imperative for the Black press.” He, added, “Continued good luck to you. America’s oldest Black paper is doing a salutary job.”[ref]Chuck Stone. “Tribune Doing a Salutary Job.” Philadelphia Tribune.  Jun. 25, 1982, 6.[/ref].

In truth, the decline of the Black Press after the civil rights movement is much more complex than Stone or any other single journalist’s exit from the Black Press. A combination of poor management, red baiting of newspapers expressing communist views, and the rise of television all contributed to not only the declension narrative of Black newspapers but all newspapers in the United States.   Still, Stone’s life is reminiscent of the remarkable racial evolution of American journalism.  Most importantly, Stone’s life and work in the Black Press corps reminds us of the space Black newspapers offered African Americans to make strident critiques of racism. The question that remains, then, is what would the Black Press look like today if African American journalists like Stone had chosen to continue work there?