Beyond 12 Years A Slave: The Early Black Press and the Kidnapping of Free Black Children by Kim Gallon 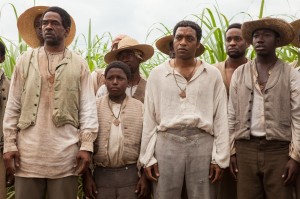 Over the past few months, Steve McQueen’s film 12 Years a Slave has reinvigorated a public conversation about the history of slavery in the United States.   The film is probably the best cinematic representation of the complexity and brutality embedded in the  North American slave system.   The film recounts the real-life experiences of Solomon Northrup, a free Black man kidnapped into slavery for 12 years in 1841.    Prior to the film, many, if not most, Americans were unaware of the abduction of free African Americans in the North.  However, the kidnapping of free Blacks happened regularly enough that it posed a significant threat to the security of free Black communities, including ones in the South. According to Carol Wilson, free Blacks living in Pennsylvania, and Delaware, states bordering Maryland, faced the most danger. The proximity of these regions to the Mason-Dixon line facilitated kidnappers’ transportation of their victims to southern farms, plantations and urban centers. [ref] Carol Wilson. Freedom at Risk: The Kidnapping of Free Blacks in America, 1780-1865. Lexington: University of Kentucky, 1994, 10-11.[/ref]

While much has been made of the kidnapping of Solomon Northrup, the kidnapping of free Black children occurred more often than the abduction of free Black adults. Children were particularly vulnerable to kidnappers or “man-stealers” as they were easier to take than adults.[ref] Wilson. Freedom at Risk ,9. [/ref]  Children were less likely to have freedom papers  on their person.  Children also lacked the credibility of adults, even Black ones, and had a more difficult time convincing others of their free status.  Children bound out to employers to contribute to the household income were often taken.  Instead of releasing children back to their parents at the end of their labor agreement, some employers sold the children into slavery. Employers such as these took advantage of African American families and children made vulnerable because of poverty and their tenuous status as free Blacks.[ref] Wilson. Freedom at Risk ,13. [/ref]

Once sold into slavery, children often encountered physical (including sexual) and mental abuse at the hands of owners. Many of the children abducted into slavery grew up as slaves and never knew freedom again or were eventually emancipated as a result of the Civil War. Frankie Hutton has described free Black children as the “ultimate outsiders.”  Disportionately orphaned and impoverished, many free Black children’s lives were made exponentially worse as victims of attempted and successful kidnappings. [ref] Frankie Hutton. The Early Black Press in America, 1827 to 1860. Westport, CT: Greenwood Press, 1993, 129.[/ref]

McQueen slightly touches on the plight of children in 12 Years a Slave.  Solomon meets Randall, the young son of Eliza, a slave woman who had been sold into slavery by her master’s (also her lover) angry daughter, in the slave pen where he is being held in Washington, DC.  We see Randall calling for his mother and Solomon whispering harshly to him to be quiet, fearing physical reprisal for both himself and Randall.   Although we only see Randall briefly in the film (he is later shown jumping at the behest of a slave dealer to demonstrate his health and vigor to a prospective buyer and then being separated from her mother as she is purchased), he and his sister’s image ask us to critically reflect on the lives of free Black children.  The Antebellum Black Press offers one of the best opportunities do this.

The early Black Press played a major role in publicizing the kidnappings of free Blacks. It demanded that the United States government take steps to protect free African Americans.  The very first Black newspaper, Freedom’s Journal featured and promoted “The Protecting Society of Philadelphia” an organization dedicated to eradicating the kidnapping of free Blacks.[ref]Freedom’s Journal. May 16, 1828.[/ref] 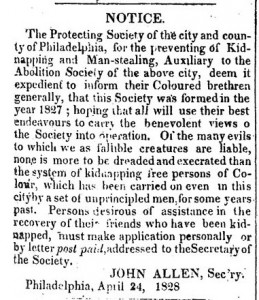 Editor of the paper, Mirror of Liberty, David Ruggles served as treasurer as the New York Vigilance Committee, which was also founded for the purpose of fighting kidnapping as well as the detention of fugitive slaves.

The Black Press took great pains to publish information about free Black children seized by kidnappers.  In doing so, the Black Press revealed just how vulnerable free African American children were in the North before the Civil War. 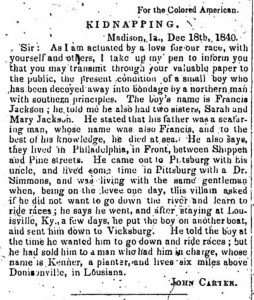 The same year that Solomon was kidnapped from Washington, D.C. an April 16, 1841 issue of the Colored American featured a letter from John Carter who recounted the kidnapping of Francis Jackson, a young boy from Pittsburgh.[ref]Colored American. April 16, 1841.[/ref]   According to Carter, the young boy was induced to leave with the kidnapper with the promise of attending the races.  In an effort to try to locate the boy’s relatives or seek help, Carter gives the boy’s location and the name of the person who he had been sold to in Louisiana. 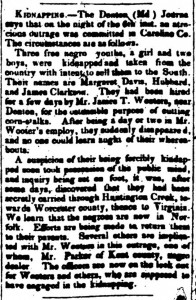 Northern Black newspapers were also concerned with kidnappings that occurred in slave states.  Some newspapers like the North Star reported kidnapping stories from articles published in Southern newspapers.  A May 4, 1849 issue related the abduction of three children, two boys and one girl from Caroline County, Maryland.[ref]North Star. May 4, 1849.[/ref] Hired out to cut corn stalks, the children’s employer, James T. Wooters kidnapped them and sold them to a slave dealer who carried them to Norfolk, Virginia. 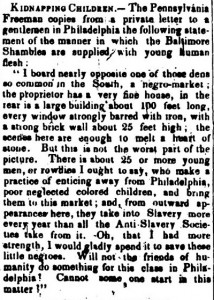 Another North Star issue in 1851 documented the pervasiveness of child kidnapping in an excerpt of a letter reprinted from the anti-slavery newspaper, the Pennsylvania Freeman.[ref]North Star. April 10, 1851.[/ref]  The letter writer described a “negro market” in Baltimore used to hold and sell free Black children, who by the writer’s account, had been enticed away from Philadelphia by “25 or more young men or rowdies.”  Stressing the magnitude of these kidnappings, the writer states, “…from outward appearances here, they take into Slavery more every year than all the Anti-Slavery Societies take from it.”

Together these articles demonstrate the central role the antebellum Blak press played in making public the tenuous nature of freedom for all free African Americans.   These papers remind us that as long as slavery existed in some measure throughout the United States, no African American could be free, despite the illegality of slavery in the North.   Above all Black newspapers reveals the ways free Black communities sought to protect the most vulnerable members of their communities, Black children.

The Black Press in Antebellum America