What Happens When a Black Newspaper No Longer Wants to be “Black?” by Kim Gallon

The digital world offers people the opportunity to reinvent themselves.  Anyone who has ventured into the world of online dating can speak to the creative ways individuals reimagine themselves through profiles that speak more to aspirations and desires rather than reality.  But does the Internet offer companies, organizations and institutions this same opportunity?  Can McDonalds suddenly become a five-star gourmet restaurant offering artisan cheeses, specialty meats and exotic ingredients despite its brick and mortar fast food franchises that are ubiquitous across the United States?  Can the University of Phoenix become Harvard University simply by calling itself such?  Alternatively, can a Black newspaper decided one day that it will no longer be 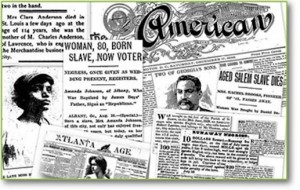 a Black paper?  If so, what does the paper become?  What processes are involved in this transformation?

Historically, the Black Press has been dedicated to the uplift and positive representation of people of African descent in the United States.  It has defined itself as, Stanley Nelson argues, “Soldiers Without Swords” in the fight for social justice for African Americans.  Most contemporary Black newspapers have brought this tradition into the 21st century.  I am not sure I would have necessarily thought about a Black newspaper renouncing its Blackness until I encountered two newspapers, (I am choosing not to identify them) while I was working on compiling a list of contemporary Black newspapers in the United States that were once Black but are now “general” newspapers.

Part of this process of involves me (or one of the BRPC fellows) calling various newspaper organizations to verify contact information.  When I make these calls, I customarily introduce myself as the director of the Black Press Research Collective and that I am calling to verify contact information for the paper. On two separate instances a newspaper staff person interrupted my opening introduction to inform me that their paper was not “Black” but a general paper.  In the first the call, the person on the other end cheerfully stated that the paper had been Black at one time but that about five years ago it shifted its focus. The other paper flat out said it was not Black but a community paper. I was taken aback with each announcement but politely ended the call wondering what it means to be formerly Black.   I immediately went to both newspapers’ web sites to see if I could answer this question.   One web site contained news, national and local, and ads clearly geared toward African Americans.  The paper also continues to be a member of the National Newspaper Publishers Association (NNPA).  The other paper’s web site, however, reflected no visible signs of African Americans issues or information related to Black life.  Indeed, it appeared that the newspaper, in an effort to be a general paper, included very little human representation and limited visual images to race-neutral ones.   The papers’ web sites added more complexity than clarity.  In one instance shedding the label “Black” did not appear to dramatically alter the tone (no pun intended) of the paper.  Yet the second paper, though it has an owner that is African American, has wiped away all visible vestiges of Blackness from its public face.

While my initial questions remain, both papers’ purported transformation from “Black” to “general” publications does beg the question, why?  Perhaps the papers believe that their survival requires them to broaden their market.  One can certainly imagine that changing demographics in a community could kill a paper exclusively devoted to one group.  Alternatively, both papers may operate under a post-racial concept, which suggests that a Black press in the tradition of its predecessors is no longer needed. What I do know, however, is that these Black newspapers’ decision to no longer be Black is an unprecedented option; historically most Black publishers have not had (nor desired) this choice.  Thus, it remains to be seen whether this is a positive direction for Black newspapers and African Americans overall.